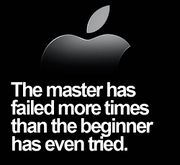 I'm not an Apple basher, or Apple fanboy. Apple is a company, like any other. The problem is once you're big, you attract attention (good and bad), and the most newsworthy stories are those with the most drama or sensationalism. I hate them both -- the rabid fans and Apple haters. But I do like to document the stuff others aren't. This article isn't into their many revolutions and successes, just a few highlights of technologies or ideas they went *splat*. Not to bash my Fruity Cupertino friends, but any mistake is useful, if you learn from it.

Apple released the iPhone 6 and 6+, and if you sat on them, they could bend. That's a high cost loss, though in many cases the phones were still usable. The problem was both blown out of proportion (it wasn't easy to do), and valid (it shouldn't be that easy to bend, anyways). So it was a PR fiasco, even though the 6's were still the best phones one the market at the time, and some other phones were equally or nearly as fragile. It was a huge, brief, brouhaha, that died away as quickly as the next generation came out (with some improvements to stiffness).

Apple got a class action lawsuit filed against it (2011), which accused the company of operating an illegal monopoly by nature of their ecosystem not allowing iPhone users to download and install mobile apps outside of the Apple App Store, thus reducing consumer choice. The case was dismissed in 2013, then appealed and heard in 2017 to the 9th Circuit (allowing it to move forward), which lead to Apple appealing to the Supreme Court to allow for it to review the rulings (writ of certiorari), with the obvious goal of allowing the first dismissal to stand.

Apple's position is that it doesn't set prices for paid apps, and that charging a 30 percent commission on the distribution of paid apps and in-app purchases does not violate antitrust laws in the United States. They're probably correct that from the letter of the law, they're fine. From the spirit of the law, not so much.[1]

My problem is that from a legal position, I think Apple is right.... from a moral one, they are way wrong. They might not be a monopoly because there are competitors mobile phones (like Android), where you can build/install many apps, and Apple isn't even the biggest player (the definition of a monopoly) -- but Apple has put barriers to entry and barriers to competition in their ecosystem. If you're a porn App, political app (that's not left leaning), have adult content, you are trying to compete in a category that is saturated, you want to create an app to sell/distribute other apps (compete with the App Store), or you're just doing something they don't like -- Apple can and does reject people and eliminates all paths to market for those App developers.

If Apple offered a bypass (a way that users could install apps without App approval), then I have no problem with the App Store's T&C's. But since they obstruct all other ways of installing anything on our phones, without their permission (and their cut), Apple is being anti-competitive in spirit, even if it isn't by law. But judges jobs are to adjudicate on the law as written from the bench, not legislate from it (or imagine what the law should have said). So even though I think the iOS ecosystem would be better if Apple was forced to allow users to OPTIONALLY install 3rd party Apps, without their App Store, I don't think the judges should be able to rule on what Apple should do. Which leaves me conflicted with, I hope they lose for the ecosystem's sake.... and I hope they win, or it shows that this court is willing to do legal gymnastics to stick their fingers in things that are the responsibility of legislators, not judges.

Steve was ruining Apple in 1985 and would have destroyed it, if he wasn't kicked out. It was Gassee's OpenMac (the SE and Mac II) that saved the company. If instead of cramming the one small Mac down people's throats he'd made an effort to turn the Lisa into a MacPro (instead of trying destroy everything that wasn't his), if he'd allowed the Mac to be more Open (instead of closed system), and allowed/supported more Games, it would have been a different story.

If Apple hadn't of bought NeXT (both the smartest and dumbest thing they ever did without him), NeXT would have been dead within a few years, or they could have picked them up cheeper. So luck more than skill saved NeXT there. (There were many other paths to success or doom for Apple at that time, so their path isn't as clear).

The MacMini was something Apple resisted for way too long. Their entire server strategies. The iPod was a side project not Steve's great idea. In some ways the iPhone proves the Newton was right (and sooner). I still think the divergence of iOS from MacOS is a problem. IBooks and iAds aren't raging successes. (I'm not against them -- but the margins and cost structure haven't achieved goals and a missing opportunities). And then there's AppleTV -- if Apple could make the deals to displace cable, the world would be a better place. (Of course I don't think that's because Apple doesn't want to do it -- but it's sort of evidence that what they did wrt inflexibility in the music industry came to haunt them later: in the long run, it's best to make win-win deals, instead of win-lose).

And I could go on, and on. (And all of those are nuanced). There are many paths to success. Some assume because they succeeded that they did things right. But it's more they didn't do things wrong enough that they failed. There are ALWAYS ways they could have executed better, or blew opportunities and made bad choices. To think otherwise is arrogance. Of course the other side often made more bad choices, or had other issues, or they would have won. But there's always a skill, effort, and luck factors. But not considering your mistakes is missing the opportunity to learn from them, and do better next time.