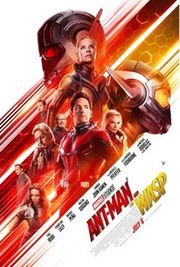 Ant-Man and the Wasp, is the long anticipated sequel to Ant-Man (2015). I'm not sure who was really waiting with baited breath, but I'm sure some fan was. These are silly, zany super-heroes with an absurd abilities: to shrink and grow and most fights involve a lot of both in something that makes other super-hero movies sedate and followable in contrast. They aren't bad, and you know you're getting a lot of slapstick type super-hero stuff, with a screw-up super-hero and his sides cracking one-liners: but sometimes movies are just an excuse to get out of the house.

Like the first in the series, it isn't deep, but it's not meant to be. And they get OK rating on Rotten Tomatoes: 86/78 -- meaning it's not horrible plot or acting, and people are getting what they expect.

This movie continues where the first one, and one of the myriad Avengers movies ended. Henry Pym's wife, and daughter Hope's Mom, has shrunk to sub-atomic levels, and they're trying to find her and get here back with the eventual and reluctant help of ex-Con Scott Lang, the lovable ex-thief trying to stall out his 2 years under house arrest for a prior movies capers. Hope is bitter over Lang's prior escapades (helping Captain America without her approval). All under the eye's of the semi-incompetent FBI agent Jimmy Woo.

They of course run afoul of evil black market technology dealer Sonny Burch and his henchmen, are trying to outsmart the cops, and the "Ghost" -- a chick that phasing between multiple universes and so can go through walls and is both here and not here. If you don't know where this movie will go, or how it will come out, you're probably not familiar with the genre. But there's a lot of play with making big things small, and small things big -- especially in the difficult to follow perspective busting fight scenes.

If you want to kill a couple hours with an amusing but disposable super-hero, this is the show for you. This certainly won't be the best movie out of Hollywood this year, even for the genre, but it won't be the worst. Silly, shallow escapism, with a few one liners, lots of special effects, and passable dialog and acting.