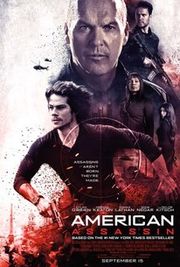 A completely predictable, but not unwatchable super-spy movie.

You've seen the story line so many times, you know it by heart. Mitch Rapp loves his fiancé, who is killed by terrorists in front of his eyes (if this is a spoiler, you haven't watched the trailer). So of course he decides to become the baddest mo-fo in the world to get them back. You can practically hear "Eye of the Tiger" playing, while he's doing one-handed clap pushups and beating people up in his MMA classes. Then CIA Deputy Director is impressed by his moxy, and so brings him into a super-secret double-good special ops group, under the tutelage of Stan Hurley (Michael Keaton). And you know Stan is good, because he doesn't fear liability lawsuits when he disregards all common sense safety practices, like playing with live ammo and real knives. Lastly, they're going after a super-duper good ghost, who has to be Hurley's ex-protige.

So how did it make you feel?

I'd feel guilty about telling you the storyline, but it's all in the teaser. And if you don't predict it from the opening credits, you need to watch more of these things.

That being said, while being COMPLETELY clichéd and predictable, it wasn't bad. The acting wasn't terrible. The scenes weren't terribly shot (most of the time). The action was reasonably interesting. And there weren't any dead spot where I was bored (it went by quickly). So it didn't stink, and was worthy the money. But after seeing it, it sort of grates a bit.

It was getting a 36/72 on rotten tomatoes (review/viewer), and usually when there's this big a disparity, it means I'll got with the audience... but this wasn't that movie. This was the rarer movie where I don't agree with either of them. It was somewhere in-between. It's a good movie for an airplane, or if nothing else is on, and you just have to watch an action film.

But if you think about anything, it'll piss you off. "Wait, what? Why are you recruiting such an obvious liability?", or "you can't just just put a physicist and plutonium in a bag, and shake and bake a beautifully machined Nuclear device in a couple hours". And plutonium is the most deadly substance known to man... they all but tasted it, to see if it was real. Then there's the geography... you're at one part of Rome, then poof, you're an hour away in 2 minutes commute time, then you're 8 hours away in another 5 minutes by boat.

If you can suspect disbelief enough to enjoy the movie, as soon as you're think about about anything, you feel cheated. So it was the Sharknado 3 of spy films. Enjoy it if you must. But don't say I didn't warn you.