Confessions of a recovering atheist. I used to call myself an Atheist, because I don't believe in an anthropomorphic (humanized) "God". But most of the atheists I heard talking or writing, were kind of douche's, so I was almost embarrassed to be associated with them. Plus there's always doubt: we don't know what's out there beyond our comprehension, so being too definitive is being close minded. I think it's highly unlikely there's a temperamental deity out there who cares where I put my penis or how I often I gratify myself, but the idea that our reality or existence was tampered with seems reasonably likely. So I had to put so much prefacing or qualifications in my atheism, that it became easier to say, "I'm agnostic".

What I don't believe

While I don't believe in the Biblical God, that doesn't mean I ignore that there's things beyond my comprehension, including sentient beings with powers that I can't understand. That also means I believe the Bible is not the literally word of God, it is the word of man, but there's still a lot of room for spirituality and religion in there. Were those men inspired by God? I don't know. But just because it is the word of men, doesn't mean it is wrong, or there aren't lessons to be gleaned.

I believe the bible is a set of allegories meant to teach people through tales how to be a better person, and belong to a community of traditions, etc. And that religion gives people a lot of peace knowing that they're not just killing time until they become worm food. (People want and need to serve a bigger purpose than just their Hedonism -- and religion provides that purpose). So whether it is the word of man, or of God, doesn't change that many men had good insights that I could learn from. And who knows if what inspired those men to write that goes back to residual knowledge from creation: what I call footprints left in our psyche by whatever created us? So whether it is chance, or divine intervention (runtime hacking of someone else's Wetware), I'll never know. But mankind has a need to create God(s), that doesn't seem like an artifact of evolution. If you want to dive deeper into why I don't believe in God, read my article: What is God?.

What I do believe 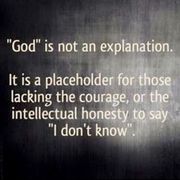 My view is 'first there was nothing, then it blew up'... then I have no room to mock someone else's beliefs". But that gets me back, to I don't even believe that. I believe that if there was an initital big bang in this universe, then there's something going on in other universes (dimensions). An explosion in one, is a black hole in another. (There are re-occuring bubbles that are universes, we're just in one of them, not really understanding the world ourside our aquarium).

Since we can't see or test most of these (and never will), then astrophysics is a religion. (e.g. you can't believe that ≈90% of the universe is invisible "dark matter/engery" and pretend you believe in only the tangible. You're just making shit up because you want it to be true, and you want your equations to balance.

Most of the micro/macro universe starts falling into a religious system to describe what we want to be true, because it makes our equations work. (e.g. faith -- and the place where science/religion become a singularity).

So the difference between science discussing what happened before or the big-bang, and theologians or philosophers debating on whether God could make a rock so big that he couldn't move it (or how many angels could fit on the head of pin), is irrelevant. Once you're in those weeds, you're just a bullshit artist trying to defend your own biases/ego. I'm fine playing along, as long as we all recognize that we don't REALLY know, we just have things that work for us, or our community.

Some think Atheist is an anti-religion, since they don't believe in God. But I don't agree. That would imply they have no beliefs based on faith, and I have yet to meet that atheist. Once you talk to one, you find out that they have beliefs that they can't prove, they just replace their faith in a Priest (or Book) with faith in what reporters/teachers told them that scientists believe. (Rarely looking at the underlying work, or double-checking the math). So while atheists may be anti-religion, that doesn't preclude them from being religious... it just makes them lacking in introspection.

One of the arguments that proves there's a God is logic/science/probability based.

Ergo, odds are we are simulations in someone else's blind study. And that means the odds are in favor of someone making us (or having their fingers on the scale of our reality), or it all being random chance. Thus science hints that God is real, and we are the myth (or construct).

I always believed that there's a fuckton that I don't know, and that humans may never know. And that there might be something bigger and beyond my comprehension. I just don't believe things like:

So I'm converting to the moniker of "Agnostic" because it seems to inject a bit more uncertainty, and I don't have to worry (as much) about being associated with people that deny America was a Christian country, founded on Judeo-Christian ethics (including tolerance of other religions: more or less), or be one of the douche nozzles that attacks prayer in school, before public events, and other ceremonies that cost me nothing, and help bind people and give them peace.

Plus, as a friend put it, "The best part about being agnostic is that you get to needle both sides".