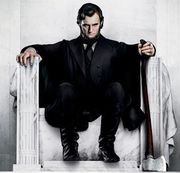 My interest in Honest Abe, was always about the darker parts of his history, that the High School History books skimmed or skipped. People are complex, so the more I heard this caricature of the Greatest American President, the more I wanted to know his humanity. And it turns out that he was a racist orator (just less racist than his contemporaries), with a an ego large enough to get over half a million men murdered (more Americans died in the civil war, than in WWII), and freeing the slaves was a vindictive byproduct of the war his election victory started. So I focus on the darker side of Lincoln, not to ignore the lighter side and the propaganda half-truths, but to remember the other half as well.

Memes about Honest Abe... I'm not really a fan, and so rather enjoy these.