To the left, everything is about community organizing and their protests and self-righteous indignation. To the informed, those tantrums usually came late after the cultural tide was shifting and the Jonny-come-lately's did little but try to take credit for the success of others. Like Henry Ford (Capitalism) standardized on the 40 hour work-week, most others had adopted it, and then the Federal Government created a regulation that said we should adopt it for the very few remaining and took credit for something that was already done. Then the leftist media (like NBC) repeats the lie, and the gullible gobble it up. Thanks Unions for riding on the coat tails of others. 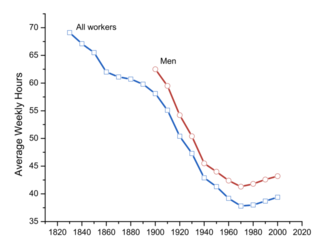 Capitalism and industrialization gave us the productivity gains, which made the 40 hour work week possible and the trend had been happening for generations before Ford had standardized on it in 1914 (without strikes or unions, he did it to attract the best labor).

The Fair Labor Standards Act of 1938 by FDR was mostly unneeded by the time it was passed as far as the 44 hour work week it mandated -- and it only applied to less than 20% of all workers. But the goal there was not to help workers as much as it was to reduce productivity so that companies had to hire more workers (and focus on child labor laws) -- and it also set the minimum wage, which defeated it's intended purpose and increased unemployment.

When economists and historians were surveyed, 88% of them either agreed or mostly agreed with the proposition that economic growth – NOT Unions – was to thank for our reduced workweek. In fact, only 5-6% thought that unions were the primary cause.[1] While that isn't definitive proof, it does show that the informed disagree with the left on this.

So Unions successfully lobbied congress in 1938 to give them what capitalism had already given us. And the naive and misinformed believe that it was Unions that did it. Those who glanced at the data know otherwise. [7]