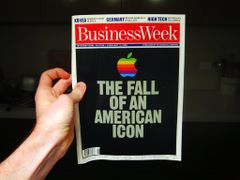 I remember back in 1996 when everyone was declaring doom and gloom, and gleefully claiming the end of Apple was neigh. I didn't think a company with that much customer demand, and goodwill, and superior technologies over the competition was doomed. I bet against the experts, and became a millionaire.

I had looked at their stock, knew the company (and its problems), and knew that while they had structural issues, if they could get through the next few years, they still had some good product and technological leadership. I went down and bought $3,000 in stock. (A few years later, when they had another correction, I repeated the process). Thanks to me betting against the elites like BusinessWeek, and trusting my own instincts, I made myself a millionaire. Apple recently became the first Trillion Dollar American Business.

There were other companies that I probably should have put my faith in as well: Google, Amazon, Facebook -- but being into tech, I knew too much about them and their flaws, to make those bets. Just because they were big "Unicorns", didn't mean I could trust their management or technology. It turns out while they didn't always make good technological or brand decisions, they still were still good enough to become huge and far more successful than I expected. (Size and momentum turned out to be as good for stocks as competence and technology). So you win some, you lose some.