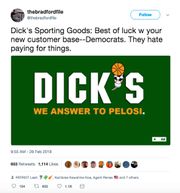 How to shoot yourself in the dick? Be a Sporting Goods store named Dick's, then alienate a large swath of your customer base and suppliers who are hunters and gun owners, by replacing the Constitution with your hypocritical corporate ethics. This move left a mark, in the short and long term. (To the tune of about $150M or 1.7% of annual revenue, in the first year alone... more to come).

Dick's CEO (Edward Stack) got preachy against some guns and banned "assault rifles" (see small caliber hunting rifles with a few plastic parts)[1]. They had done this once before, in 2012 [2], but they weren't serious -- just get the publicity, then do nothing. But this time they decided to destroy those weapons in a sign of solidarity with anti-2A fascists[3], then they decided to invent their own law/policy to NOT sell rifles to anyone under the age of 21 (despite the law saying the age is 18). Since that's against the law (age descrimination), they of course, got sued, and will likely settle or lose. [4]. Then they hired some anti-gun lobbyists to push for gun control[5].... and a few suppliers, advocacy groups and enthusiast decided a little tit-for-tat was in place.

The results are a predictable drop in sales, estimated at $150M in the first partial year alone -- with more to come. (Figured that could have paid for ≈3,000 employees salaries). [11]

In the end, I leave it to private companies to decide what their policies are. But when they choose to make up their own laws, and force-feed their customers their far-left, ignorance-based-agenda, then I choose to not buy anything from them again. This isn't a boycott, per say. I just take my purchases to places that want what my business, not to pry into my business, or try to tell me what to think or do.

So each of these snowflakes thinking their opinions are important, and trying to deliver their sanctimony to their customers, deserves to learn that actions have reactions. They can be Social Justice Warriors, but everyone who isn't (and has a triple digit IQ) is likely to just buy on-line or from Cabella's or their competitors. And maybe the board/investors can learn that Edward Stack is undermining the company, employees and investors that he claims to represent.

2019.03.12 After pissing off their customer base, and getting backlash on gun sales (and sales in general), Dick’s Sporting Goods is pulling all firearms and hunting gear from 125 of their 850 Dick’s and 35 Field & Stream stores. Field and Stream is becoming Feel and Stream? Seems like Stack's PC agenda is requiring them to change their business model and customer base -- we'll see how the sales trend goes. [12]