If you heard that Republicans funded the Steele "Pee Pee" Dossier, you're a victim of FakeNews. Many Democrat operatives are guilty of repeating the lie: New York Magazine (Jonathan Chait), CNN (Brian Fallon), MSNBC’s (Velshi & Ruhle and Rachel Maddow), NBC (Christina Ginn), AP, New York Times, even James Comey. AP issued a correction, NYT clarified in later articles, but most others let the lie/confusion stand, or underplayed the truth: that it was bought and paid for by the DNC and Hillary campaign, and used to get illegal warrants and put a paid spy in the Trump campaign. 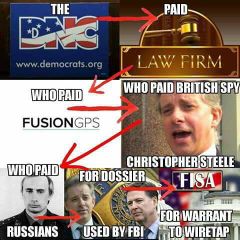 One GOP-affiliated donor (Paul Singer funder of the Washington Free Beacon) did a contract with Fusion GPS for opposition research, and then backed out quickly. Then Democrats/Clinton Campaign funded Fusion GPS, Steele was retained to create the dossier, and the dossier was used to get illegal warrants and spread misinformation, that the media also repeated.