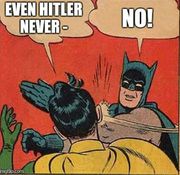 Sean Spicer (WhiteHouse Press Secretary) while talking about Assad (Syria) use of chemical weapons, misspoke (said something completely true but inartfully worded) and corrected himself (clarified that "as a tool of war" and not talking about gassing civilians) and apologized all in the same news-conference. Far left outfits like CNN, CBS, MSNBC, Snopes, Politifact, all ignored the correction/clarification and used the gaff as a way to attack Spicer and Trump, and spin a non-story into evidence of why they were a bad administration. They also ignored many cases where others on the left had said the same truth. Lies of omission, and sensationalism, are evidence of propaganda/FakeNews.

Of course that Spicer clarified that he was talking against enemy combatants in a war, and not "Holocaust centers”, in the same briefing, so we all knew exactly what he meant -- but the media often omits that context. Instead, they pretend that using a term like "Holocaust center" is somehow trying to diminish the term "Concentration Camp", when the truth is that it is a far harsher term against the Germans and not a diminishing of it.

In the briefing, Spicer said,

Immediately after the briefing where the Press was playing gotcha, Spicer released a statement saying,

And later that very night on CNN, he further apologized,

And the very next day at an event called Newseum, Spicer apologized again,

And General James Mattis had also clarified statements on the same day (about why the missile attack), and everyone knew exactly what was meant

So this was a non-issue. Anyone that asked Spicer a question about it after he corrected himself in the Press briefing, immediately after it, Mattis clarified, and Spicer apologized on the same night, as well as the next day, is not a journalist. You know the answer to the questions asked, so there's no use in asking them. The purpose in asking any more questions on that, is to malign and attack, not to inform your audience or getting any new information out there. Instead of accepting that, the media continued to refuse to get the obvious and clarified point, and attacked him with questions about something they already had the answer to, and knew perfectly well what he meant. If anyone did that during Obama, they would have cried racism.

Pretend we had a responsible media, that cared about the truth. Every thing would be a teachable moment (even someone's gaffe). You' explain the following:

The usual fact check sites did their usual job of checking half the facts and committing lies of omission:

On the other side:

Democrats said he should be fired for saying such an immoral thing that shows "bad character". To quote Nancy Pelosi,

Ignoring that he had already clarified once and apologized, twice before Pelosi made those statements. How soon they forget things they or their side said:

Where were Nancy Pelosi's cries for the firing these folks? And that's the problem: the double standard.

More than that, CNN, CBS, MSNBC and others used this as a way to attack the administration, which as mentioned above isn't journalism (which is to inform, not further your political agenda or vendetta against the administration). "Everyone gets in trouble for using Hitler references".... except Democrat operatives using it against Republicans/Trump. And the Hill made a gaffe in attacking Spicer for his lesser gaffe, should they be held to the same standard they're holding him, or not? :

I don't care if you think Spicer is an idiot or said something stupid. Any place that played the Spicer clip without the corrections, or let Nancy Pelosi or other vile partisans attack Spicer without offering the context of their side doing the same thing, is not a journalist, they're propagandists. Journalism is making sure both sides of the story are explained and trusting your audience. If you only tell one side of the story, it shows you're ignorant and haven't done your research, or you're a partisan polemic that's intentionally deceiving your audience.

If there's any doubt of bias of a ginned up controversy, remember the topic. The point Spicer was making was to vilify Assad regimes use of Chemical Weapons (just had Obama had done), and to isolate Assad AND to pressure Russia into separating themselves from the Assad regime. It was to attack Russia -- but since that didn't fit the medias FakeNews "Trump + Russia" meme, they changed the topic to Holocaust Denial. If they cared about human rights in Syria, or Russia, they would have focused on those topics, which was the meat of the Press conference -- but their larger agenda was something else: attacking anyone in and around the Trump administration for anything.