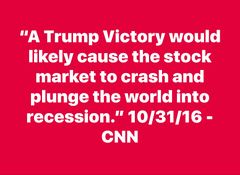 CNN predicts a Trump win will crash stock markets 10-15%, but a Clinton win would be great. The stock market responded to a Trump win by leaping upward, and continued to break records for a couple years, before having a normal correction. In fact, it when ABC spread Fake rumors of Trump's tax plan getting blocked, the market did panic (not the other way around). The point is not that CNN is often wrong (they are), but they sound more like DNC than news.