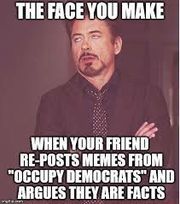 After a series of coordinate Paris Terrorist attacks, the San Bernardino attack, and various other islamic extremist attacks, during the campaign, Candidate Trump says we should consider a temporary Muslim ban until our leaders can figure out how to address the crisis. After elected and consulting with lawyers, he does a far more moderate thing. Before doing journalism (interviewing and asking what does he mean), NBC (Tom Brokaw) spun the story with half truths and compared this to various leftist atrocities (without offering that context). Trump's implementation (a couple years later) was just to require extreme vetting from a list of countries that the Obama administration flagged as being unable to effectively vet people from. Oh the horror. The left and FakeNews continue to call this a Muslim ban anyways, not letting truth get in the way of their agenda.

Trump is a bit of a windbag, but journalism is getting the facts before reporting - Trump has a history (as detailed in his book) of making large statements to set a stake in the ground for negotiations or effect, then walking/negotiating them out to moderation. Anyone with a basic clue about him knows this. Instead of doing journalism (interviewing Trump and asking him what he actually meant and how it would work), NBC "News" has Tom Brokaw, present their case, with extreme exaggerations of what this could look like. They made assumptions, false comparisons, omitted context, and did propaganda rather than gather information and share both sides with the public.

Other far left outlets like Occupy Democrat, MSNBC, Huffington Post, all pick it up and get the vapors over Trump calling for concentration camps and the rounding up of muslims. The truth is all Trump wanted was some stronger vetting against a few middle eastern Islamic extremists. }}

Brokaw took over NBC News after scandal' - In 1992 “Dateline NBC" was caught rigging trucks to explode (using model rocket engines), as part of their consumer reporting. While Brokaw avoided major scandal during his tenure, his protege and successor (Brian Williams) was fired for lying more than the Hillary Clinton (and getting caught). We know most newsman that claim to be non-partisan and "completely fair", come out as staunch Democrats after they retire, to the surprise of no one but others in the media. Tom was no exception and admitted as much in 2004, then took-over and destroyed the credibility of "Meet the Press" with his bias.

It was the Democrats that gave us the things Tom is whining about - remember who the Democrats are, they are the party that gave us all of our biggest shames that he's whining about (like the Japanese Internments), the progressives were in bed with the National Socialists until the war, and so on... then they blame it all on everyone else, to dodge culpability. They gave us Slavery, Indian Removals, Trail of tears, Segregation, Jim Crow, Lynching, the Ku Klux Klan, they gave us Japanese Internment, they opposed the civil rights movement in 1964 (Republicans broke their filibuster), they opposed the voting rights act of 1965, then tried to re-invent the fiction that it was only the South that was the problem (it wasn't), and invented The Southern Strategy lie, that all the bad lifelong democrats magically shifted parties after that, and now vote Republican.

Lies of omission (and commission) - Remember some of the fact that Brokaw omitted (necessary context). If you don't know these things, then the story was FakeNews:

We seem to have a national history of Democrats doing really bad things, and Democrats in our press forgetting to point out what party they belonged to, and blaming a Republican for being a threat, because some of his populist rhetoric might be a fraction as divisive as Sanders or Warren or other democrats rhetoric is, on a regular basis. I don't like that divisiveness in either side, but I like a pot lecturing me on the kettle's blackness, even less.

Once you get past the lies, the point is nothing but an anecdote - If you don't have supporting facts, then it was over-sensationalized speculation and opinion (OpEd), not News. Once you get past all those lies and errors and embarrassing misstatements of facts, then Tom ends with his minor point. There was one good Muslim-American that fought and died for American values in Afghanistan (the good war), before Obama let that place go to shit -- and in Brokaw's mind that should make up for the half dozen major terrorist attacks that left thousands of Americans dead due to muslim radicalism. Nothing to be concerned about with radical islam, time to move on.

The point isn't that I think we should persecute Muslims for their religion. (Not at all). Or that I like Trump's style. But if overstating what other people said is wrong, or if lying is a bad thing (as Brokaw is claiming), then perhaps he should be more careful with the facts and context himself?

It's the denial of the left to accept history, and to attempt to rewrite it, that is infuriating the populist movements in the first place.

There are those that are mad because they know history and how Brokaw just raped it like Bill Cosby on an drugged up intern. There are others that are mad because they can do relative threats -- and the threat of letting in 100's of thousands of un-vetted refugees from muslim countries that hate us, outweighs their compassion for the plight of innocents, caused when Obama failed to do anything about the war in Syria or growth of ISIS. All of the backlash of Trumpism is against the lash of Obama and the Obamabots. If the left could be honest for once in their miserable lives, and own the real risks and mistakes, and explain to the American people what they're going do to mitigate it, then maybe we could make real progress. But their strident denial of reality, is causing a more shrill retaliation that allow Trumps rhetoric to strike nerves and gain momentum. And the more we get denials like this puffy-propaganda riddle diatribe, the more they convert people that know better into supporting windbags like Trump.

I don't like Trump because he throws arounds words sloppily, then corrects and moderates them a little later (sometimes), then repeats the process. But based on his history, he's done nothing to persecute minorities or muslims, and he's often used bravado and exaggeration. So we know he's unlikely to do what democrats have done (round up people based on their race). And if he tried, I have faith that our system of government wouldn't allow it (if Democrats aren't in control). We also know that each time a Democrat Talking Head in an expensive suit, exaggerates or lies about what he said, that an angel dies. And there's few of those things left.

So everything I hate about Trump's style, is exaggerated in the other side. Brokaw and Occupy is doing everything with their lies of omission/commission, revisionism, distortion, attacking Trump (and his supporters by proxy) that they claims to hate or to be "warning against" from the other side, in his sanctimoniously-ignorant style. It's that hypocrisy and lies, that make we want to vote for everything they hate, just to wipe their smug expressions off their hypocritical lying mouths.

Thus every time I see a fraud like Brokaw, distorting history for partisan politics, it makes me want to vote for Trump just to show those douche-nozzles what I think of their fascist propaganda. I won't vote for Trump, but I will vote against the criminality of Hillary, the apologism of that by the media, or against the lying liars that lie about their causes like Brokaw, Occupy, and anyone willing to propagate that tripe (over either not knowing better, or not caring).