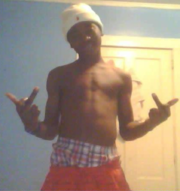 Media meme: a white guy stalks a shot an innocent black 12 year old honor student (as depicted), was shot for wearing a hoodie while in a white neighborhood. He had just gone to the local convenience store for some medicine and skittles for his sick little brother at home . That was how the media, the left, the black community and Obama played it (one and the same thing). Obama jumps in, makes a federal case about it, and empathizes with the kid that, "If I had a son, he could look like Trayvon".

Truth: Turns out a non-racist latino community-watch guy was responding to a 17 year old, 5'11", tattooed, gold-grilled, self-dubbed "No_Limit_Nigga", thrown out of school for drugs and theft, stoned (THC in his system), with a history of drugs, violence and robbery, walking in the rain at night, looking in windows (house to house). After he had the 3 ingredients for a common thug-drink called Lean or Purple Drank (skittles, cough medicine and AZ Ice Tea). When the community watch guy tried to see what the football playing MMA wanna-be gang-banger got to, he was jumped by Trayvon, assaulted, mounted, and beaten on, until he fired his gun in self defense.

There was no evidence of racism. And if Trayvon had been white, asian, or latino and done the same stuff, the same result probably would have happened, and it wouldn't have been a media story. The President never corrected the race-huckster angle and never tried to calm the racial animus, which emboldened the race baiters, and lead to many more incidents. (You reward their bad behavior with media attention, and you get more of it). The violence of today, can be traced back to this false narrative and a President that was a community agitator instead of a diplomat.

And the problem isn't only that the media ran off half cocked and got everything wrong at the start. They almost always do that. The problem is they didn't make an effort to correct the record, or call bullshit on people repeating the lies:

Zimmerman (a latino community-watch guy, not a white guy) was acquitted, for obvious reasons, and those reasons weren't racism -- despite all the hand-waiving and pearl clutching by the racists who wanted him punished for ending a black thugs life.

You can read Obama's racist speech (and my rebuttal) here: That's President Racist to you

And to keep the stupidity coming, you have things like Florida Memorial University (a Black University: of course) awarding Trayvon a posthumous honorary degree in aviation (because he liked getting high?). Nothing like attaching their brand to a dead thug to help their credibility and enrollment: http://www.dailywire.com/news/16103/university-award-trayvon-martin-posthumous-degree-amanda-prestigiacomo

7 years after Trayvon Martin, the far left (like Kamala Harris's tweets) and FakeNews media is still repeating known lies about the case. Any time the News lets the dems repeat the lie without correction, or repeats it themselves, it lets you know that they're not a credible News outlet. And any time a politician repeats it, it lets you know that they're a liar working against our national interests and trying to divide us for votes/money. [1]

George Zimmerman sued the family after the documentary The Trayvon Hoax (2019) exposed that the family had done a switcharoo with who Trayvon's girlfriend was, and what had happened. That they had knowingly committed witness fraud, obstructed justice, or lied repeatedly under oath in order to defraud the court to railroad him. [2]