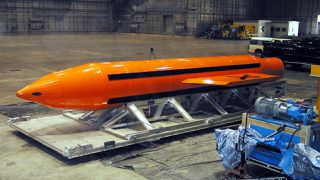 If you listen to FakeNews purveyor L.A. Times, NYT, Time, CNBC or ThinkProgress, and you'd walk away with the impression that the MOAB costs $314 Million. Or there was a later estimate, where they said that it was only $16M. All were wrong, not a fact checker among them.

First, you have to understand that part of Military procurement contracts is usually the contractor that makes the product, can not defend it or talk about it in public (without governmental permission). That means that the lies are free to perpetuate until the media does it's job of fact checking, which they rarely do.

In truth what likely happened (but no one bothered to write an article on), is that the initial contract was $314M to develop the system (over like 15 delivered to inventory, and 5 for testing). And someone said either $314M for the program, or $16M/bomb (amortized), and they just went with either assumption. But neither is truth. The $314 is sunk costs to develop the system. If you never build one, you don't get that money back, and if you build 100,000 more, it doesn't cost you a penny more. So the costs to make one, is the $170K, and it would go down, if you started mass manufacturing them -- and the initial costs, were just the initial costs.

But even then, they used the wrong weapon system, and they cited from an unreliable source (Deagel.com).

Alex Jones (Infowars) quoted from Deagel by warning it's readers that you might not want to trust the estimates. "we publish this report with some hesitation and a healthy bit of skepticism, yet find it compelling enough given the current global environment that it may be of interest to readers.” Just remember, Alex Jones may be a conspiracy kook, but this is just one example of where he had more journalistic integrity than Time, NYT or LAT.

Why do they care?

The answer is they don't really care.

The fiscal chicken-hawks in the media, who all have no problem with Obama or Clinton's bombings, will come out of the woodwork to complain about the costs. How many schools/social programs could we spend that money on? But only because they want to spend that and more on their pet projects. Then you point out that California spends $25.3 billion a year ([1]) on Illegal Immigration costs, or their High Speed Rail will run around $96B at current burn rates, and they don't care. Showing it was never about the money.

In the end, this is why reading/watching both sources is always a good idea. Especially double-checking the mainstream media, as when they're sloppy, they seem sloppy together.