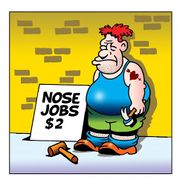 My first "major" medical procedure was a nose job. When I was a young kid (age 8), I was climbing over a cinderblock-wall/fence (cinderblock). I was going over the top when I noticed the top block I was hanging on to was progressively tilting towards me, and I was thinking, "hmmm, it isn't supposed to do that". Then gravity took over, and my brain thought to block the block that was coming to meet my face; but my hands were holding me up, so in slow motion I got to watch the block drop and give me a big wet kiss - smack. I remember falling, and thinking, "this is not good". Then hitting the ground, and opening my eyes in pain, just in time to see the same block falling to my face and hitting me, again, to finish the job it wasn't sure it had done right the first time.

After that I remember blood and rushing home screaming, and more blood, general unhappiness, and so on.

The parental attitude back then was the loving and compassionate, "walk-it-off" and here's some ice, sort of thing. I swear, if I'd got my arm caught in a farm thresher, my parents would have given me an ice pack and told me to stop whimpering.

The end result was that besides having sinuses and allergies, I also had a "severely deviated septum"; e.g. broken nose. People used to call me Darth Vader, because I would breath through my mouth (because I had no sinus passages left), and I had the same wheezing tone of the dark lord. My Mom was especially fond of my breathing pattern and tell me lovingly to stop it, to which I'd come back with the, "what, do you want me to stop breathing now too!"

So other than having a broken nose, I also had some Iranian heredity, and Italian mix. Gads, there was definite beaks in my bloodline; and I'd lost the gene pool lottery in that aspect of my life. I never felt the mix was a particularly attractive nose, though I'm sure some Tucans found me particularly sexy for a human; but mainly I wanted to be able to breath like a other people, and not some asthmatic space tyrant on a respirator. And while I've never been particularly vain about my looks, I didn't feel that a little straightening and knocking off a foot or so would have hurt.

So at 18, I saw a doctor and got my nose fixed. The procedure itself was nothing too horrendous. I remember going in, them giving me happy pills, sticking some shots in my ass, and telling me "this might sting". I mentioned when they checked up on me, that there was a burning pain running up and down my leg, "oh, that's just the sedative". My retort was, "the burning up and down my leg isn't making me very sleepy". She just smiled, and said, let's go to the procedure room.

So I walked to the procedure room, and the nurse was kind of helping me; which I didn't mind at all. I said, "I can walk on my own", but she ignored me. About 5 steps down the hall, my legs gave out, and she caught me with a smile. Damn, she was pretty strong for a little thing. I kinda liked it. But I was wearing my indignity gown; with my ass flapping in breeze, and was a little concerned that if I saw something I liked (and I kinda liked her), that I might just point. Fortunately, the nerves and humiliation kept me from reliving and "come to the head of the class, without your books" horror stories.

The interesting thing was that the valium they gave me back then wasn't as good as the cocktails they give people today. I know because I've had both... and I remember little flashes all the way through the surgery.

Things like trying to talk while they worked on my face with all sorts of things, and the doctor getting annoyed because I had spent the entire surgery trying to sell him a computer. I guess I was just chatty-Kathy under the anesthetic; and I couldn't understand why a practice like his didn't have the latest Commodore Computer; which I could setup and program for him.

I also remember having my wrists strapped down. Later, I asked him why they'd done that. He got a big grin, and said that anesthetics eliminate inhibitions, and that I found his nurse very attractive; and I'd made it to second base before they decided to lash my hands down. Gads, I turned beet red and stopped talking after that; sex-crimes were not in my character. She just waved and smiled and seemed to enjoy my extreme discomfort while I mumbled apologies and inspected something intently on the carpet.

The other thing I remember distinctly, is the horrid sound of little hammer on chisel on bone sound as they would go, "tap... tap... tap... snap... crack..." inside my skull. It was weird, but you could feel the vibrations down to your toes. I was numb so it didn't really hurt; but it was unpleasant enough that I remembered it through the drugs. Good news is that memory through anesthetics is rare - and while I had it a few times as a kid, as an adult, I no longer get that, or the drugs got better.

The Doctor was babbling something about how my nose had been far worse than they thought, and it took a lot more time, and there were many breaks in it, and so on. Now days they have scans that let them know what they are getting into ahead of time. But back then, it was like a toy surprise inside every package. I'd be fine and see him in a week and that was about it.

I walked out to our car, now been an hour or two after the surgery, and proceeded to puke like a teenage drunk - which wasn't that far from how I felt or what had happened. Throwing up with this hockey mask thing over your face, and no ability to breath through your nose (not that I had that before), was a traumatic experience. But I made it home; and was amazed at how firm the car rode, and how bumpy the drive was.

The good news is they had given me drugs. The bad news is that you really really need them. I remember popping Vicadin like they were baby-aspirin, and being in a fog for a few days. It wasn't a particularly pleasant fog. It was a fog that felt a lot like the one I'd been in when I ran home with my nose smashed as a kid. I didn't like that fog at all. But the drugs did wipe out a lot of the memories, and the stupor went by pretty fast.

After that they took off the guard and let me see my new face. I don't bruise much; so I didn't have much raccoon eyes at all. And I don't swell a lot either. So what I saw was basically what it was going to look like; except for one thing. My entire nose had turned into a festering bright read pimple and rash covered beak. I was allergic or something to the jell that they had on my nose-guard - and my already pubescent complexion turned into something new that I've never seen in books; but looked a little like those baboon butts I've seen on TV.

The best part was that it was over. The worst part is that it hadn't gone particularly well. Of course it hadn't gone that poorly, as I was able to walk away from it (my criteria for a bad surgery). But I think my Mom had found this guy in the discount plastic surgeons handbook. She was always frugal about such things - and had pictures of an ad, "first five patients are half price". Later sinus doctors would look up my schnoz, and I could tell that their professional courtesy was making them bite their tongues - though a few didn't and suggested demolition and reconstruction. Somehow I didn't get that their motivations was just their next Porsche payment.

My nose was left less straight than it had been to begin with. Actually, the bone is straight, and the cartilage was straight, they just weren't lined up; so it looks crooked. It was smaller, and more importantly, I got probably 80% open, and 60% open in my respective passages - which was a lot better than like 20% and nothing that I had before.

So there were many "wins". Still the cartilage never really attached right; and so it was real easy to re-break (actually separate the cartilage from the bone - not really break the bone). Which I've had happen a few times due to martial arts, or being married.

All in all, I thought the surgery was a bit miserable and humiliating. I wasn't too pleased with the mask of stupidity, or the bozo nose that took a couple weeks to get rid of; both were probably magnified in my mind, being a teen at the time. While a couple doctors recommended major rebuilds; I haven't been eager to play Mr. Potato-Head again, but I have gone back and had sinus surgery - they just laser some stuff out, and reopen the passages. And that was just a few days of hacking blood and wasn't nearly as bad as the first surgery. So I assume techniques have gotten better, or that my teenaged perspective had made it seem more miserable than it really was.

Experiences vary by person, and I gathered I was one that got the shorter end of the stick. But, it was only a couple weeks, and did help long term; so was worth it. So if you need to get it done, or want to get it done; I'd say go for it. Short term, I hear that many other things are worse - and long term, it is better than the alternative. Heck it was almost worth it for the drugs, and the loss of control that got me to feel some hot little nurse. If only I could remember...