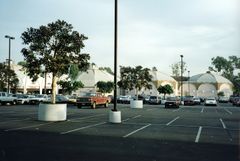 Orange Cinedome Theaters - 3001 W Chapman Ave • Orange, California 92868 - A summer job I did was at the local movie theater; the Orange Cinedome. In writing this, I did a web search and found that it has been torn down. But they captured pictures before they did that. It brought back some memories. It was one of the last 70mm theaters in the area, at least before it was gone. I'd know it was big, but not how big. As jobs go, working in a movie theater wasn't too bad. I was young, and the toughest part was getting down there. Biking about 5 miles down wasn't bad; riding back after my shift, and it was a gradual uphill grade, was a lot tougher. Plus it got hot, and getting there, without being disheveled wasn't always easy.

I got to see a ton of movies, and the work wasn't bad; picking up after slobs in the movies. I understood "the floor is my garbage can" mentality, and it didn't bug me. And there was a lot to do; work concessions, help clean and so on. I worked hard, at least compared to the other flakey kids, and was liked and valued. It wasn't a bad gig for a kid, and I got to see a lot of people, even if I got mocked for the whole outfit thing.

I'd worked most of the summer, and then near the end got fired. Frustrating because I'd liked working there, and really hadn't done anything wrong. I'd worked a long shift, and we (me and another usher) were waiting for the ending credits so we could "trash" the theater. (Clean it). I knew the movie, we'd cleaned everything and done our job, and there was less than two minutes to go in the flick; so we sat in the back row and waited. Another usher came in to help, saw us ready to trash it, and left. We cleaned the theater, and were called in and given our final checks. While there was certainly a policy against watching movies while working, to the sane, this didn't mean sitting while the closing credits were rolling. And it wasn't like they even considered what happened; the manager called us in, fired us without asking, and used us to set an example. I told her off for not getting her facts straight - but I learned something; what something is, doesn't matter as much as what it looks like, and life isn't always fair (and you can't expect justice).

In the end, I learned that I'd made other friends in the place, and had good references that I could use in the future. And that while it may be stupid to fire good people for bad reasons, that doesn't stop it from happening. I also learned that some people have no discretion, and sometimes confuse a movie theater with a rent-by-the-hour motel room. And I got some experience, and used to occasionally help out or hang out at other theaters for a few years (friends worked there, so I'd help them and hang out, and see movies for free).