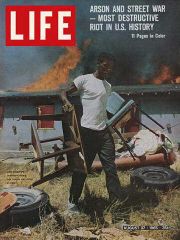 Watts (Construction) - 109th and Compton - While I was a rural/burb kid, I lived summers with my Uncle in Hollywood, or Grandparents in Burbank. Hustling on Sunset is nothing like being "white bread" working in Watts; which I did one summer. South Central was not the best time I ever had working, but I learned a lot. Most of it was not good stuff; racism, corruption, contempt/distaste for the inner-city subculture and their sloth and hypocrisy. I didn't like that world, and while I could exist in it (briefly), I knew I didn't want to.

The basics are that my Uncle and his partner were doing rebuilding all over L.A. And one of his jobs was in South Central L.A. (Watts). I was doing demolition and construction all summer, and had worked at a few places, but spent most of it at this one job. It was an eye-opener for me.

We were demolishing and rebuilding a duplex. And I enjoyed working with my hands and building. There's something satisfying about starting with a falling apart mess, and stripping the walls and rebuilding and every day seeing progress, and seeing the end result. It was hard work, and I was sore; but it was a good sore. I felt inferior because of some of the guys a worked with. One guy was in the Guinness Book of World Records for framing a 2000 sq. ft. house by himself in a single day; and was a sheer animal when it came to everything. I liked working with him, just because he set the bar so high. I learned that people like and respect people that work hard.

One rabble rouser kept griping and complaining that we weren't getting paid enough, and so on. I didn't really understand it at the time. They didn't like their lives, but they were spending so much time whining that they weren't getting as much done as they could. It wasn't a union job, but he wanted to keep having meetings about unionizing or to discuss grievances with hours and rate. And kept trying to find things to complain about. It was one of my first experiences with people who don't want to work the hours/salary they agreed to, so do everything to avoid work, complain, slack off, and blame everyone else: annoying.

One day, a couple black guys came to the site, and were complaining that there weren't enough blacks on the team. (There were a couple, but they weren't from the area). They let us know, that unless we hired more "local" blacks to sit around and "guard" the place, then vandalism each night would undo the work we did during the day, and to let the owner know that. We did.

Rather than pay extortion to them, my Uncle went to someone else. Someone "connected" in the neighborhood; who convinced these people of not only of the error of their ways, but that they should spend a good part of their unemployed spare time guarding what we did from unwanted vandalism, or whatever harm befell the site, might befall them personally. Ahem, I got to learn that there was a lot of dirtiness and organized crime (intimidation) around construction in Real Estate.

While working there, I was harassed from time to time, for being white in a black neighborhood. Most of the harassment had just been intimidation type stuff ("hey cracker", "you so white, it's scary", stuff like that), I was young and dumb, and just gave them the finger and kept on moving: I wasn't going to just back down; which is probably a good thing. If I had, I would have made myself more of a target; a little 'tude sort of saved me from more. Fortunately, after whatever deals were made meant that people gave me room to get into the liquor store for lunch runs, and didn't block my way and give me lip on the street.

I also saw a tennant, at one of the other properties my Uncle owned, say outright; "I'm in here now, and I'm not going to pay, and it's going to take months to get rid of me! That's the law!", and slam the door. My Uncle paid someone to just sit outside his house and follow him around, giving him scary looks and writing things down, hinting if the guy didn't leave that you never knew what could happen to him and his family. It was a game of chicken, and the guy decided that leaving without vandalism was the best way to handle things.

It was enlightening for a kid:

I'd been pretty liberal before this; but the inner city can kind of wake you up to the filth. This hood sub-culture was seedier, and quickly dried up any sympathy for their plights when they are giving you shit for being the wrong color, or improving their community. I'd occasionally gotten crap from whites (for being too Hispanic looking, or being a towel-head, etc.), but the racism and hostility was nothing compared to the bullshit tribalism in the inner city. They hated whites, Mexicans, asians, out-of-area blacks, blacks that were too light, and so on -- everyone was fighting to hold everyone else down, and make sure no one felt good about themselves. I got more experience with this later in life (I did social work for a while), but that was a lot to digest for me at that age.

I also learned there are many ways to solve problems, or you sometimes had to do not-so-nice things to get things done. If you let people screw you, there are some that would. The law can't always protect you. Could you afford to give up rent on a place for a year while fighting to evict someone? There's the law, and then there's the law.

That isn't to say that criminal acts are acceptable or should be tolerated; but that there is some ambiguity in there. As far as I know, my Uncle didn't do anything illegal, but he pushed as close to it as the other side would have. And knowing him, I think if they had crossed the line, he would have done so as well. I don't know for sure, nor did I want to. But I learned about looking to look over my shoulder before I bend over to tie my shoes.