13 Hours: The secret soldiers in Benghazi

A documentary by Michael Bay? What is this world coming to? While it seems like an oxymoron, and there was plenty of explosions and some jitter-camera effects, it was more Saving Private Ryan and true to history than anything Oliver Stone or Michael Moore has done, and those are called documentaries. And it was a good motive, and mostly historically accurate based on the people that were there. So worth seeing, if you want to see an action film based on real life events. 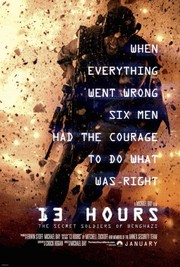 We went and saw 13 Hours: The secret soldiers of Benghazi, a MIchael Bay film. We really liked it: best movie of the year, so far -- but in the top few for last year too.

I'm not a Michael Bay fan: some of his movies were OK, some weren't. I liked Bad Boys, while Transformers just annoyed me: his abuse of hand-cams, and panning around like a paranoid tweaker at Mardi Gras, and overdone special effects, were getting on my nerves. Which was sad to me, because other parts of his productions were quite good.

Well, I think he got the message, because this one did use some perspective changes, but to the camera view that makes it look like you're watching a bad soap opera, and it wasn't nearly as frenetic (not as much running around with the shaky cam), and you could follow the action scenes without getting car sick. And the few times it was his old style, it was wildly appropriate: to show the violence of war, without glorifying it. It was his best movie ever for me.

This is not a movie that you want to take kids to: there was some Private Ryan type violence scenes. But it wasn't meant as in some war or horror movies that are glorifying mayhem, it was more very appropriate to the story.

There was a lot of hay made about whether it was political or not: the facts in Benghazi don't reflect well on the administration or Hillary (who is limping for President,: with her baggage, and the Press trying to carry her bags for her, you can't really call that running), and this is an election year, after all. Still the movie took great pains to not mention anything political in it.

Professor of Journalism, Mitchell Zuckoff, cowrote the book with the security team members who were involved in the 2012 Benghazi attack. He has many accolades in Journalism, including being a Pulitzer Prize finalist for investigative reporting, and the book and movie painstakingly avoided most of the controversial and politics topics: in fact too much so. And no one has criticized the movie for veering of the books path.

So as for the events depicted, you're left with a choice of believing politicians and the CIA Chief 'Bob', who have made careers spinning fabrications for personal gain, or those that were there and have made their careers in the Military and about honor and their word. The one controversial part, is whether they were given the stand-down order (and where it came from).

The movie left it with 'Bob' being the one that gave that order, and didn't reflect well on him, but no hint that it came any higher than him. Since he was given commendations afterwards, for what the military and most Americans would consider dereliction of duty and gross incompetence, there's some suspicion that he fell on the sword for someone else. And the military mind-set is NOT to let service men get attacked without an immediate response of running in to help. You don't leave people behind, and you don't ignore cries for help. So from my view, everything reeks that the military side of the description fits far more likely what happened than the politicians claims.

Still, the movie didn't touch the background of 600 requests for more security in Banghazi, and in fact, it was generous in ignoring that and playing Chris Stevens as unconcerned (far less concerned than his Diary and pleas to State imply he was). Nor did it touch the administrations agenda for helping to collapse and overthrow Gaddafi and Al Queda's growing presence and stronghold in the region, and what the CIA was doing there trading arms. It didn't touch Hillary's email fiasco around this, the administration obstructing investigations, and it barely skimmed past the misreporting by State that went on for weeks (while we know Hillary was knowing lying about), and covered it with two passing lines, "I didn't see any protest" and "don't believe what you see in the News". That was the extent of the politics.

And the timing, was the book was completed in 2014, and 2 years to put out this movie, on a very tight budget for Michael Bay, is not slow -- but nor was it rushed to meddle with an election. It just told the sub-story of how the embassy and annex were attacked, from the view of the security folks, and not the bigger questions.

If you have interest in seeing a war movie and about what happened in Banghazi: not the bigger picture, just the events that you'd see as one of the boots on the ground, then this is an excellent movie. If you're looking for backstory or any of the broader context about what really disgusts patriots, then you'll probably walk away disappointed. It's a very focused movie, that appears to go out of it's way not to offend the left, while still trying to document the story from the perspective of those that were there. (Show the SNAFU's in the fog or war, without pinning a lot of blame). It still didn't go far enough, as the Press and Reviews still whine a lot about the movie and it's timing. But of course, if we'd ever had the investigation and disclosures we were promised, then there would have been less need for the tell all book and movie.

I don't think it'll have any impact on an election. Those that like Hillary (or Obama) and want to vote for her, have already proven their immunity towards truth, accountability or integrity -- so this wouldn't change any minds, if it was the full story. And it isn't any of that: and is way more focused. (She isn't mentioned). And for those who don't like H or O, most of the bigger questions are in the parts of the story this doesn't cover. But it is about as close to perfect as you can get, at telling the story it's trying to tell. And anyone that has interest in what happened, and wants to see a war movie, this deserved the positive viewer feedback that it's getting.